A visit to Shaftesbury, Dorset

Shaftesbury, a small market town in Dorset, describes itself as a Saxon Hilltop Town. Since the town is perched on a hill high above Dorset’s Blackmore Vale, has a history dating back over 1100 years and is the site of King Alfred’s citadel and Benedictine Abbey, the description is fairly apt. Much of the present town centre dates only from around the 18th century however.

To me Shaftesbury is famous for a couple of things, the first being the association with King Alfred who founded a fortified settlement (burgh) here as a defence in the struggle with the Danish invaders in 880 AD and his establishment of Shaftesbury Abbey in 888 AD. The second is Gold Hill, the steep cobbled street made famous in the 1970s as the setting for Ridley Scott's television advertisement for Hovis bread.

St Peter's church, the oldest surviving church in Shaftesbury, was built in the 14th century to serve pilgrims coming to Shaftesbury Abbey and stood just outside the Abbey wall. Little remains of Shaftesbury Abbey (a Benedictine nunnery) today, but it is worth noting Alfred appointed his daughter Ethelgifu as the Abbey's first abbess.

In Victorian times St Peter's fell into disuse being used only for occasional services and the church  began to decay badly. During WWII the church interior was used as a grain store. It was finally declared redundant in 1971 and closed.  I find it somewhat gratifying that such a fine old church was restored by the Redundant Churches Fund and reopened for use in 1977.

As you might expect given the town's association with so famous a character of British history various references to Alfred can easily be found, like this one:

There is nothing to suggest King Alfred, or anyone else of note for that matter, had a kitchen here.

Of course you can't blame the locals for wanting to make a fast buck from the tourists!

I can't help wondering whether Ridley Scott would have done things differently had he known how famous his 1973 'Boy on a Bike' advert for Hovis bread would become. I imagine the boy on the bike morphing into the Alien or the kindly baker turning out to be Maximus!

The view looking down from the top of the street has been described as “one of the most romantic sights in England.” I'm not sure I agree with that especially since to many people the hill is simply known as “Hovis Hill.”

I was impressed by some of the amazing flora I came across while walking over the Dorset uplands. The lowland meadows were awash with buttercup, celendine and daisy, but as you climbed to the higher ground flora changed quite dramatically. For example, climbing to the clifftop path above Lulworth Cove I came across these beautiful mauve/pink wild freesia plants.

I don't recall ever seeing these anywhere else in Dorset, but there were several plants close to the footpath above the coast so perhaps they enjoy the salt breeze?

Tilly loved the freedom of running and exploring several of Dorset's Iron Age hill forts. I was impressed by the number of Early Purple Orchids growing among the Cowslips on the slopes.

These stunning miniature orchids are obviously hardier than they appear, I find them absolutely beautiful and was dismayed to see someone had picked several, dumping the broken stems on the ground.

I found it hard to resist photographing these wonderful orchids wherever I came across them.

Something else I found impressive was the number of Cinnabar Moths flitting from bloom to bloom. I'm used to seeing these in the fields of Monmouthshire, but not in such numbers as were present in Dorset. Here's one I photographed feeding on a Field Scabius.

Not native and considered by many to be a menace, but nevertheless beautiful are these rododendron blossoms I photographed growing in a hedgerow.

Wild roses in their various forms featured in many hedgerows.

It seems to me we often bypass our wild flowers, but we really shouldn't because many are truly spectacular and deserve to be admired and enjoyed.
Posted by Unknown at 12:48:00 No comments:

It's an age since I last posted anything here, but I want to share a few of the images I took while on a short break in Dorset recently and I want to start with Lulworth Cove on Dorset's Jurassic Coast.

All of these images were taken with my Panasonic Lumix GX1 compact system camera, a versatile piece of kit I am able to manage more or less single handed, which is handy since my left wrist and hand were in plaster at the time.

Lulworth attracts around half a million visitors a year, but as you can see on a grey day in early June there weren't too many people about.

The cove has formed over a couple of million years thanks to bands of rock of varying resistance being washed away by the actions of the sea. The unique shape of the cove is a result of what is known as wave diffraction. The narrow entrance to the cove causes waves to bend into an arced shape as they flow into the bay.

Following the coastal path westwards towards Durdle Door involves a steep climb over the headland, but the views are well worth the effort.

Laying between Lulworth Cove and Durdle Door is Man of War Bay, only accessible now from the sea or by swimming through the arch of Durdle Door.

The path down to Durdle Door is not as steep as the one leaving Lulworth Cove, but since it consists for the most part of loose gravel care must be taken on the way down.

Like Lulworth Cove the shingle beach at Durdle Door attracts many thousands of visitors annually, but the less than brilliant weather meant we had the beach pretty much to ourselves.

Dorset-born Arthur Moule wrote these lines about Durdle Door for his 1879 book of poetry Songs of heaven and home, written in a foreign land:

Shall the tide thus ebb and flow for ever?
and for evermore
Rave the wave and glance the ripple through the
rocks at Durdle Door?

Tricks of the light

Lighting the subject makes a world of difference to a photographer, but you don't always need a load of expensive kit to achieve some interesting results. I recently photographed some fungi that help make the point. 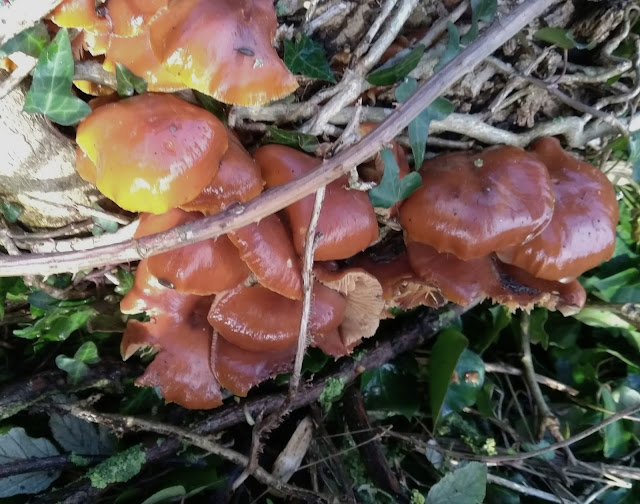 I spotted these growing in a hedgerow and noticed how the fast moving clouds and occasional bright sunlight gave them a complete makeover. 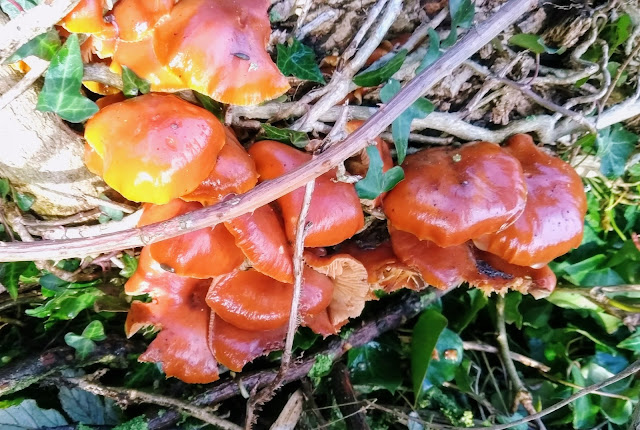 Quite an amazing difference isn't it? But nothing compared to the diffence a conveniently placed neon sign can make. 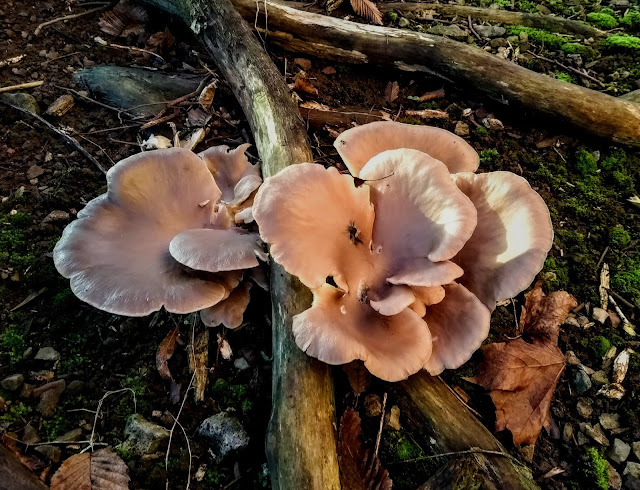 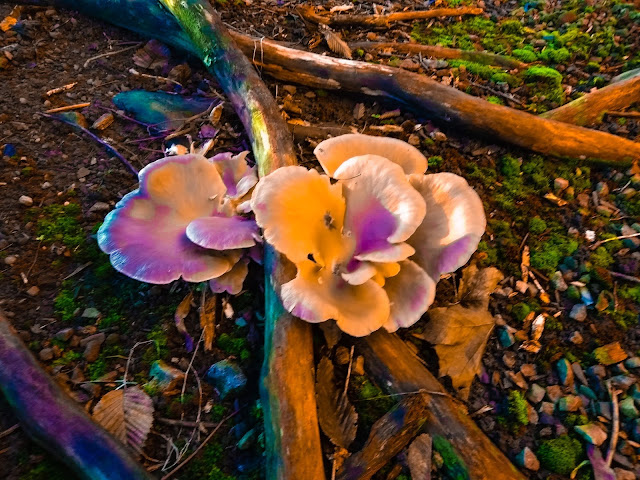 I loved the surreal appearance the bright neon reflection gave these fungi. Completely artificial of course and probably something I'll never be able to recreate, but still interesting I think.
Posted by Unknown at 09:45:00 No comments:

End of the road

This sort of thing always saddens me. It's not just that someone's pride and joy has been destroyed, it's the damage done to the environment. 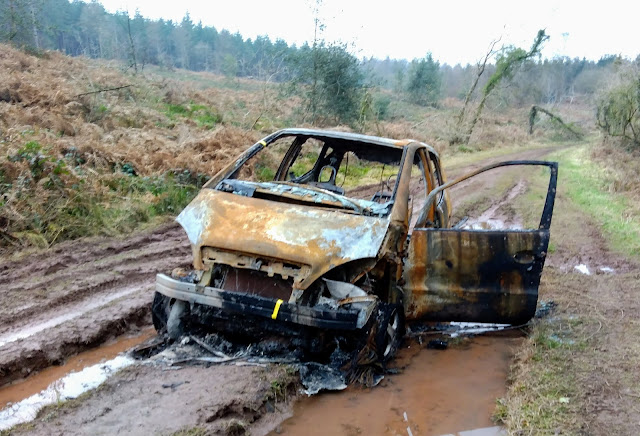 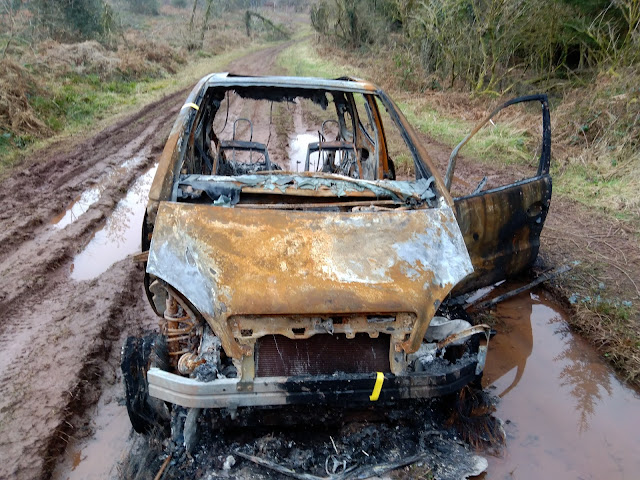 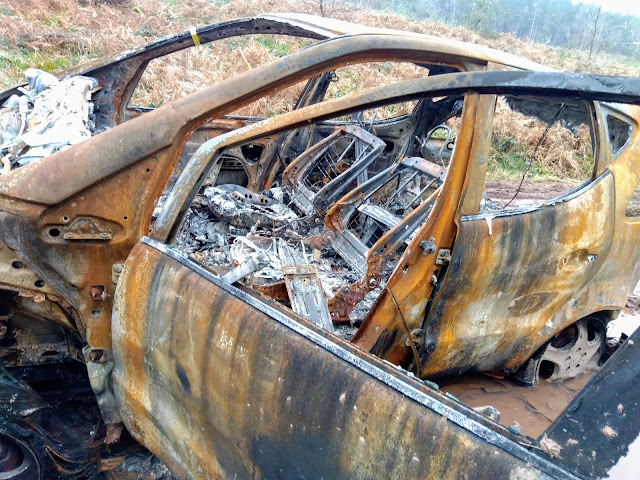 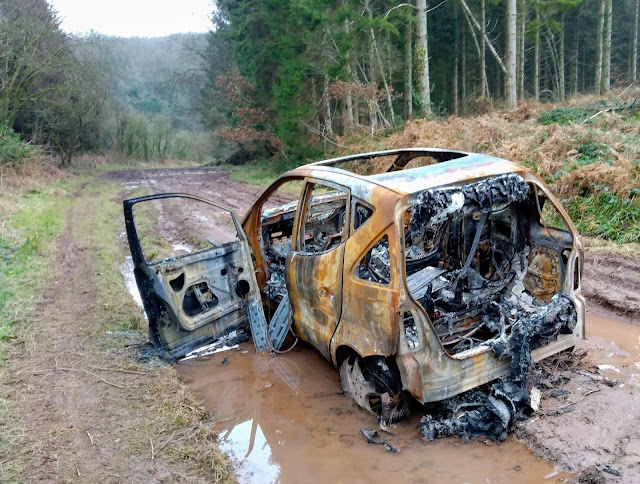 The vehicle has obviously been stolen and driven deep into Wentwood Forest on one of the service tracks until it has become stuck in the mud before being torched. An act of complete stupidity and environmental vandalism in my view.
Posted by Unknown at 09:11:00 No comments:

Victorian photographers often used the expression "Watch the birdie" when taking portraits of children. The idea was to attract the child's attention to a stuffed bird held either above or to the right of the camera, thus getting the subject to inadvertently look into the camera's lense.

History lesson over. Here are a couple of images I grabbed with my Canon G9 X pocket camera this morning from inside my dining room. 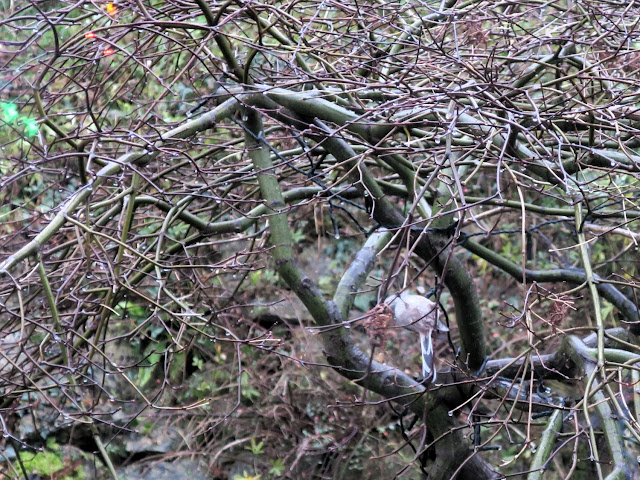 This is a long tailed tit hanging upside down in one of the acers beside my pond. Can you spot him?

I have no idea what the little guy had found to pick at, but he was definitely busy grabbing some kind of bug from the tree.

I've always enjoyed watching our garden birds and am pleased to say the family of long tailed tits have become recent regular visitors. They have joined our resident blue tits and great tits and I'm hoping they will also become residents.
Posted by Unknown at 17:29:00 No comments:

So has Bavaria moved then?